How hard is computer engineering?

Computer Engineering is a very difficult program that a lot of students struggle with. It will require you to be able to think in ways different from your normal courses and take a lot more time as well. Here, you can discover how hard is computer engineering.

Your best option would be to go for as many co-op terms as possible, but even then it can still get overwhelming at times, even for some of the most advanced students.

A lot of people studying computer engineering like to joke that it is very much easier to get a job after than electrical, but harder to stay at said job. This is essentially true as there are a lot more technical details and things you will need to keep track off while working on this program.

How hard is computer engineering?

It’s also a very rewarding degree and if you decide to pursue it, I’m sure you won’t regret it later on. There will be times when you feel like you’ve hit a wall in your studies, but never give up. If you’re willing to work hard at it then there is no reason why studying computer engineering can’t be a great choice for you.

What are the main challenges in computer engineering?

The first challenge many students will need to overcome while studying Computer Engineering is that they need to take two very different subjects and combine them together. A lot of people forget that programming is an actual skill, not just something you do on your free time. This combined with the fact that both subjects require their own type of mathematics means that a lot more studying is involved then what most other degree programs will have.

And this doesn’t even include all the electronics and labs! For example, learning digital logic requires a completely opposite mindset compared to normal math. Whereas in math problems normally start out with a given set of information and finish at the end with another certain set of information, digital logic works in reverse. You are given input and asked to figure out what output it makes based on that. It takes time for your brain to get used to this different way of thinking, but you’ll know it when you understand how digital logic works.

Another challenge is time management

This might sound like a given, but sometimes students can forget that they need to study both their math courses as well as programming assignments while also completing labs or homework for each subject. While nobody is saying that all those things should be completed by one due date (though they should), make sure not take on too many things at once.

Computer Engineering requires a lot of problem solving skills which are important to have when finding work later on . This can be broken down into two categories, “solving a problem” or “solving the same problem in another way”. Many people struggle with this simply because they don’t know how to approach problems from different angles. It’s very easy to get stuck in one mindset and just try to solve something over and over again in that way until it works. The best way to avoid this is by working as hard as you can while studying with your friends so there is someone else who will point out if something isn’t right about your code or see an easier way for you to accomplish what needs done.

Another common issue students facing Computer Engineering is the feeling of helplessness when failing to understand something right away . Like programming, it will take some time for you to fully comprehend what is being taught in class and as such you should never feel bad if you don’t grasp a concept the first time around. It’s worth noting that “feeling bad” is different than asking for help or trying something new. If there are things that you’re confused about then ask your teacher/lecture notes/friends/google etc, but never give up trying to learn more! Even after asking someone else questions about concepts and getting answers, try working through the same exercises on your own afterwards so you can fully understand them.

That last part also ties into another common problem students have with Computer Engineering: not being able to see the “big picture” . At first it might seem like you’ll be studying random things one after another just to learn them and then never use them again. In reality though, this is not true! Most of your classes will build on each other to make sure you have a foundation when learning new concepts later in your program. The easiest way to think of this is that all those seemingly random lessons are creating what is called an abstraction layer, which means your courses are building blocks for each other so you can reach higher levels of understanding without having to start from scratch every time.

How hard is computer engineering? That really depends on how much time and effort you are willing to put towards your studies! 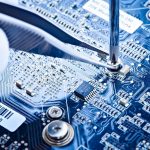 Motivation: Engineering in General and Computers in Particular

« What to consider when buying a Wi-Fi router?
The languages most used in technology »