When a satellite is launched into space moving parts are usually subjected to suffer no damage. This is understandable because when the rocket taking off many present vibrations.However, for these parts they are released are used for fireworks, which is always a danger.

Think of solar panels must deploy satellites and probes. This is something that has to be bulky folded during launch. For a time being in space, such panels are deployed need to release the fixed mechanisms, that break with small pyrotechnic explosions.

This technique is used for many years, but no longer has insecure. Any pyrotechnic explosion, however small, could represent a huge catastrophe in space. Therefore, in the International Space Station technology of smart materials will be tested to hold moving parts.

Technology is Arquimea company, which has eight years working on the development of materials that do not require pyrotechnic explosions to release the securing elements. It is too early to predict the future of this technology, but it sure will be very useful up there. Now we have to start thinking about their possible applications in the earth. 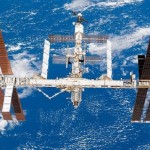 Russia wants its own space station

« Russia wants its own space station
Material for aircraft repairs only »