Thousands of times thinner electric wires than a human hair

Scientists have genetically modified a common soil bacterium to create electrical cables that not only conduct electricity, but they are also thousands of times thinner than a human hair.

As electronic devices ever more facets touch the lives of people, there is a growing appetite for technology that is smaller, faster and more mobile and powerful than before.Thanks to advances in nanotechnology (manipulating matter on an atomic or molecular scale), the industry can make materials caring as small as the order details billionth of a meter.

The new cables can be produced using renewable energy sources and “green”, such as solar energy, and raw materials using such substances as worthless as carbon dioxide or plant waste. In its final composition, these innovative cables are made of non-toxic natural proteins, and their elaboration none of the problematic chemical processes commonly used to create nanoelectronic materials needed. 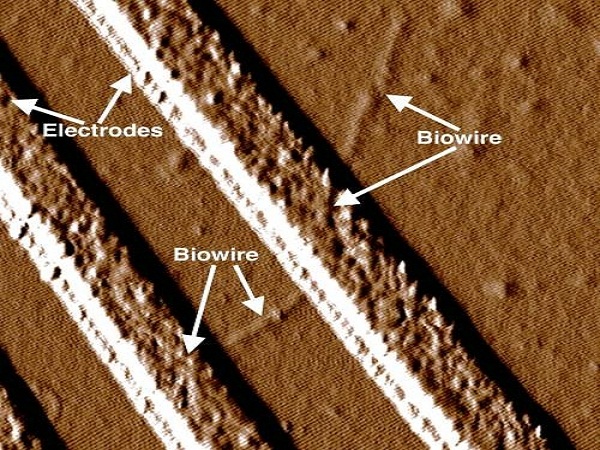 The centerpiece of research and development from the team of Derek Lovley at the University of Massachusetts in Amherst, United States, is the Geobacter, a bacterium that produces nanowires (protein filaments like hairs arising from the body). These strands allow the bacteria make electrical connections with iron oxides that help growth in the soil. Although Geobacter naturally carries enough electricity for their own survival, the current is too weak for human use, but enough to be measured with electrodes.

You may also like this: Wear Technology and Steel

Lovley’s team adjusted the genetic content of the bacteria to remove two amino acids naturally present in the wires and replace both tryptophan, which is very good for transport electrons at the nanoscale.

The idea arose when Lovley and colleagues unraveled some of the deeper workings of microbial nanowires. Then they realized it might be possible to improve the design of nature. Lovley’s team reorganized amino acids to produce synthetic nanowire.

The results exceeded the team’s expectations since the synthetic nanowires, containing tryptophan, were 2,000 times more conductive than their natural counterparts. And they have proved to be more durable and much smaller, with a diameter of 1.5 nanometers (more than 60,000 times thinner than a human hair), which means that thousands of nanowires of this type could be stored in the tiniest spaces .

« New Tesla accelerates from 0 to 100 km / h in 2.5 seconds
The seductiveness of robots when displayed expressive and communicative »